Durango, Colorado offers a glimpse into the past of American railroading. Durango owes its very existence to the booming railroad empires of the late 1800s. Durango was founded in 1879 by the Denver and Rio Grande to serve as a hub for the San Juan extension. This city on the banks of the snow-fed Animas River came to life in 1881 when the Denver and Rio Grande railroad’s first tracks were laid there. 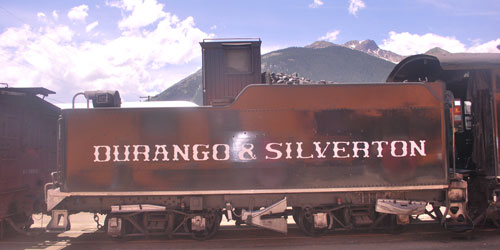 The tracks of the San Juan extension are "narrow gauge". These tracks are three feet apart compared to the standard gauge distance of 4’ 8.5”. The narrow gauge San Juan extension was envisioned by General William J. Palmer, engineer and head of the Denver and Rio Grande Railroad. The narrower rails allowed the railroad to take tighter turns and take up less space, ideal for the mountainous terrain of the San Juan range. 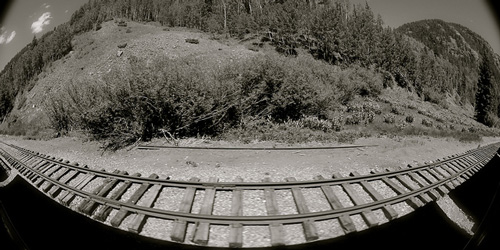 Narrow gauge track on a siding by Roy Luck

Narrow gauge or not, these lines through the San Juan range presented a daunting engineering challenge, and the Durango to Silverton Branch was the most ambitious of all. The rewards of carving a rail line 46 miles through the Animas Valley to Silverton were fantastic, though. Silverton promised “silver by the ton” and the only way to move all of that silver ore to smelters and refineries in Durango was by train. It was a risk that Palmer felt confident in taking. But he wasn’t so sure if the railroad’s board of directors would be willing to share that risk.

Always a problem-solver, Palmer decided that the best way to proceed would be to keep his Silverton Branch a secret. No photographs of his new line would be allowed until it was completed in 1882. Palmer was wise to keep his project under wraps. Images of the narrow gauge line snaking along a canyon wall, perched 200 feet above the river below might have been cause for concern about Palmer’s sanity. But Palmer’s lifetime of experience in railroading and training in engineering gave him the confidence to push forward with his Silverton Branch. The Silverton Branch was completed in July of 1882, only 11 months since the rail lines first reached Durango. 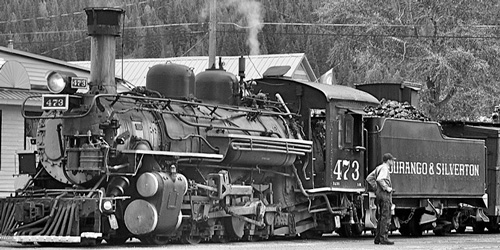 In continuous operation since 1882, The Silverton Branch today is a lasting remnant of the Denver and Rio Grande. Although the Denver and Rio Grande is long gone, the Durango and Silverton Narrow Gauge Railroad preserves the memory of that Rocky Mountain railroad empire. Most of the equipment on the railroad is original, with a few reproductions, such as the Silver Vista observation coach. The locomotives used for excursions are all coal-fired iron horses from 1923-1925.

D&SNGRR owns three K-28 class steam engines and four K-36 class engines. The railroad also maintains five diesel powered engines for general switching duties. In addition to these engines, three more engines from the turn of the century are on display. One C-16 and two K-37 class engines are static display engines. The engines get their start on the day early. Early morning visitors to the railroad’s roundhouse can watch the engines emerge and turn on the 65 foot turntable bridge.

The D&SNGRR has an impressive rolling stock collection of nearly 50 railcars. The oldest, General Palmer’s personal coach, dates to 1878. The 2006 reproduction of the Denver and Rio Grande’s observation coach “Silver Vista” inspired the second glass-roofed coach built from scratch in 2013, the “Knight Sky.”

A round trip on the Durango and Silverton Narrow Gauge takes about eight hours. Numerous special excursions and themed trips keep the journey as exciting as the scenery. Some passengers take advantage of the train’s pass through the San Juan National forest to enjoy backpacking camping trips or just day hikes, returning with the train as it passes through.

The biggest draw for the rail line is the scenery and the engineering marvels of the rail line as it passes through the Animas river gorge. The stunning features of the railroad are what allowed it to survive while others failed. The narrow gauge lines of the San Juan first experienced financial trouble when silver no longer backed every dollar in the U.S. treasury. The cost of mining and refining soon outweighed the market value, so the old lines were slowly abandoned.

The narrow gauge carried various cargo during the years before it became a sightseers attraction. The creation of nearby Mesa Verde National Park was a major contributor to the upsurge in visitors hoping to enjoy an excursion on the Silverton Branch. World War I and the Flu Pandemic of 1918 threatened the railroad, as did a major flood in 1911. During World War II, the government appropriated narrow gauge railcars to service in Alaska. Uranium ore was mined from Silverton and hauled on the Silverton Branch where it was refined at the abandoned American smelter south of Durango.

Armed guards accompanied the train as it hauled the mineral essential to ending World War II and starting the atomic age. Oil and gas discoveries helped keep the railroad’s freight line profitable, but the main source of income remained passenger leisure travel. Later, the rail line gained popularity as a location for motion pictures. The 1967 film Butch Cassidy and the Sundance Kid is a better known production filmed on location at the Durango and Silverton line. 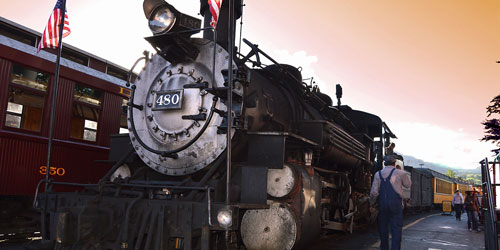 In 1969, the line was listed by the National Park Service as National Historic Landmark and was awarded as a National Historic Civil Engineering Landmark. In that same year, the Denver and Rio Grande abandoned the tracks that linked the Durango and Silverton Narrow Gauge to the rest of the United States rail system. Since then, the preservation of the line has depended on the sightseers who visit Durango to experience the old west.

The line begain hauling gold and silver ore, but now it carries priceless memories for visitors to spend with friends and family traveling with the iron horses of the old west. When visiting Durango, Colorado, a trip on the Durango railroad should be at the top of your list of things to do in Durango. There are quite a few Durango hotels in downtown Durango near the train depot at which to stay. 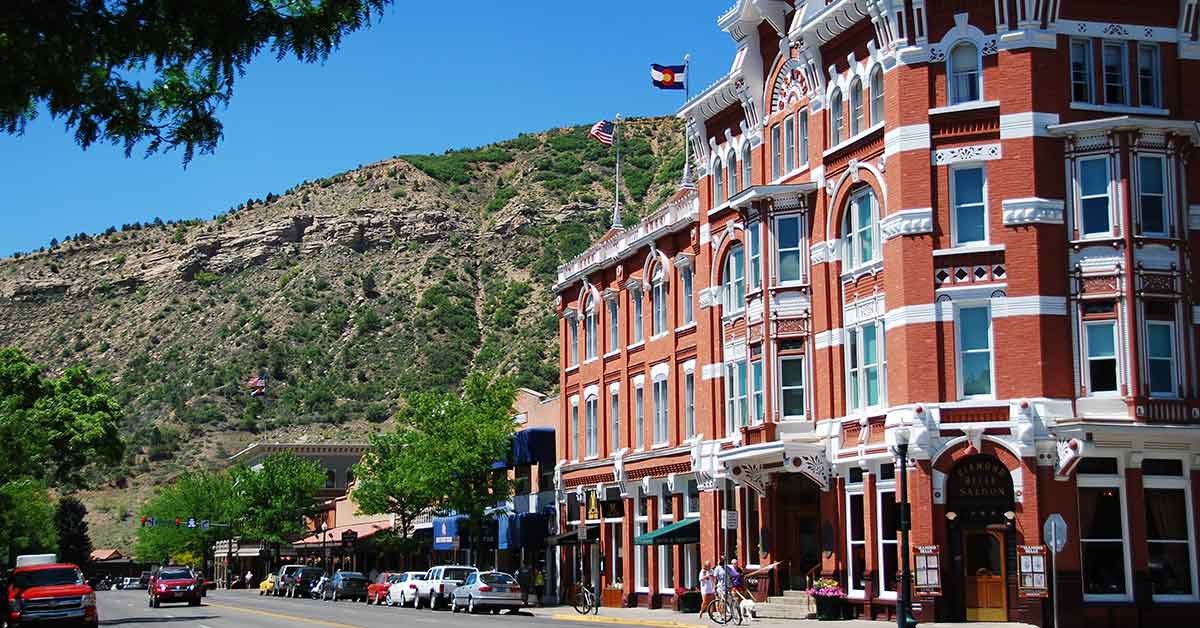 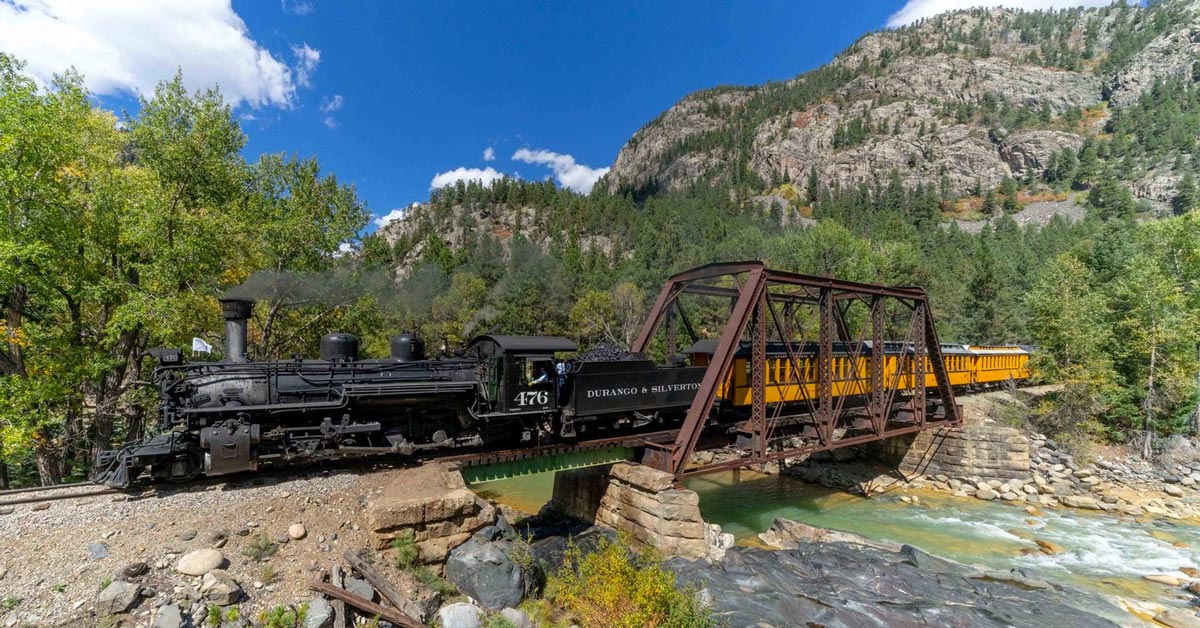