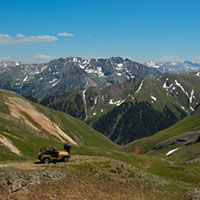 Here you can find all sorts of Durango travel tips! Durango is easy to reach by road on two major U.S. Highways. From the west or east, visitors can arrive in Durango on U.S. Highway 160, a road once known as the Old Spanish Trail. From the north or south, visitors can arrive on U.S. Highway 550.
Above Durango, U.S. 550 is part of the scenic San Juan Skyway. Parts of the road share the former railroad grade of the Silverton Railroad. The section of U.S. 550 above Durango is sometimes referred to as the “Million Dollar Highway” a nickname that some say alludes to the millions of dollars in Silver that once was hauled on the old roadbed. Below Durango, U.S. 550 from Albuquerque, New Mexico offers a modern four-lane divided highway. This approach to Durango is preferred by many travelers who fly to the International Airport in Albuquerque and drive the final distance to Durango, a trip just over three and a half hours by car.

Parking is available at the Durango Airport on a short and long-term basis. Long term fees are $5.00 per day. Short-term parking costs $1.00 for every thirty minutes beyond an initial free thirty minute period. More information is available by calling 247-9501.

Parking in Downtown Durango consists of street parking and permit spaces. Municipal lots are available free of charge in the evenings after 5:00 p.m. and all-day on Saturday, Sunday, and U.S. holidays. Parking is by permit only during weekdays. Permits can be purchased at City Hall, the Bank of Colorado, Wells Fargo, or the First National Bank of Durango for a fee of 15 dollars per month. Municipal lots can be found on 2nd Avenue in Durango on the 600, 700, and 800 blocks. The largest lot is a car park at the 700 block of Camino Del Rio. Street parking is controlled by parking meters. Be aware that some meters are limited to half-hour, 2-hour, and 10-hour time limits. 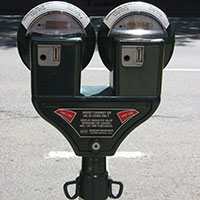 Trolley tokens may be used for payments to parking meters, which may be offered freely by local businesses as a courtesy to patrons. Tokens may be purchased in bulk at City Hall or participating banks for $9.00. A nine dollar roll contains ten dollars worth of tokens. Do not park alongside yellow curbs except for evenings after 5 p.m. Monday through Saturday. Parking alongside yellow curbs is permitted on Sundays all day with no fee. Curbs painted green are never available for parking. These are bus and trolley passenger stops. If you receive a fine for violation of parking regulations in Durango, you may pay your fine at City Hall. A box is available for fine payment outside. Questions about parking concerns or fees may be directed to the Parking Division office at City Hall. 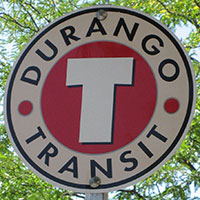 While On your stay, a great alternative to driving and searching for parking is the Durango Transit system. It consists of buses and trolleys that run in three convenient lines weekdays from seven AM to seven PM.

Bus stops are indicated by a sign with the red Durango T logo, and the fare is typically $1. The Durango T lines connect at College Drive and Main Avenue at Fort Lewis College.

Durango has a regional airport with jet aircraft service, the Durango-La Plata County Airport. The airport is served by two airlines. United Airlines serves Durango through Denver and American Airlines serves Durango through Phoenix and Dallas/Fort Worth.The airport is situated to the southeast of Durango. It is accessible from Durango by taking U.S. 550 South and then taking U.S. 160 East approximately 5.5 miles to Highway 172. From Hwy. 172, the airport is located on Airport Road, also known as C.R. 309, a right turn off of Hwy. 172.