Terry Rickard: Live at the Belle

Terry has been entertaining Strater guests and locals for years! Terry grew up playing in rock bands around the Boston area before moving to southern California. In the 80’s and early 90’s he played all over Orange and L.A. counties as a solo guitarist-vocalist. He played in many fine clubs and restaurants such as the Rusty Pelican in Newport Beach and Captain Jack’s in Sunset Beach, just to mention a couple. He now lives in southwest Colorado and plays at resorts, clubs and restaurants throughout the Four Corners area.  Terry’s musical roots are classic rock, but after living in Colorado for some time he can also do a full night of country music. He can also mix in some blues, reggae, contemporary rock and his own original compositions. Terry also has an excellent three piece band that plays a wide variety of music. 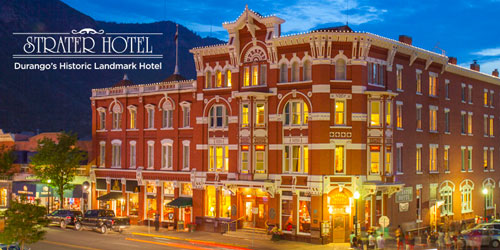 Built in 1887, the historic Strater Hotel in Durango is one of the West’s iconic hotels and a prominent downtown Durango, Colorado landmark loc...